DO YOU BELIEVE IN EVANGELISM?

This is one of the more difficult questions to answer because there are so few who derive their understanding of what “evangelism” is from the Bible. The Greek word “euangelistes” only appears in the Bible three times. It literally means “a messenger of good or a proclaimer of glad tidings”. It is basically synonymous with a preacher of the gospel, or good news. It is from this word that the activity of “evangelism” derives its meaning. Paul told Timothy, “do the work of an evangelist.” (2Tim. 4:5) He then sets forth the gifts which the LORD gave to the church for the perfecting of the saints in order that they may be equipped for the work of ministering to one another, by saying, “And he gave some, apostles; and some, prophets; and some, evangelists; and some, pastors and teachers.” (Eph 4:11) Only one other time is the word evangelist mentioned in the scriptures. We find it in Acts, “and we entered into the house of Philip the evangelist,” (Acts 21:8)

So, it is obvious that there is a work to be done and that real men are sent by GOD to perform this task. It is also clear that one of the primary fields in which this evangelism is to take place is in the church for the edification and encouragement of the saints. We do know that the LORD particularly instructed the apostles to go into all the world and teach men the things which HE had instructed the apostles in. (see Matt.28:19-20) We believe that this is indeed the work of evangelism even as HE told them to “Go ye into all the world, and preach the gospel to every creature.” (Mark 16:15) What we find nowhere taught in the scripture is that they were sent to make converts or win souls (to use the modern terminology).

In modern vernacular “evangelism” is the activity of seeking to make converts out of unbelievers or proselytizing those who presently make no profession of faith. This endeavor is pursued with some degree of “fervor” by those who think that it is possible for men to be “persuaded” to believe the gospel or that men have the ability to become the sons of GOD by making a choice or decision to do so. Many techniques of persuasion and mental finesse are used and replicated as “successful techniques” to gain these decisions of men.

Charles Finney is probably the “father” of modern soul winning strategies as he introduced many inventions that have become synonymous with “evangelism” in the present time. He was the first to popularize what is now known as the “altar call” or “invitation” which has become standard fare at the close of most so called “evangelistic meetings”. The concept is to capitalize on the weakness of people in a highly charged emotional atmosphere to break down the walls of man’s resistance and get him to step forward with an emotional commitment .which is promoted as being synonymous with conversion to faith in CHRIST or at the very least a commitment to rededicate oneself to a more intimate walk with the LORD, as if man had it within his power to do either one. I have even heard some say that at times men have to “help” the HOLY SPIRIT. It is a highly successful sales technique which is effective in gaining its objective, but such commitments are seldom those which are the work of the drawing of the SPIRIT and are most often the result of the skill of the “preacher” to gain his objective. Most of these “decisions” are forgotten after a few days. 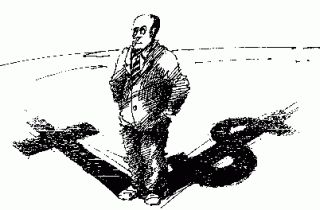 Setting the mood and having the right music coupled with the skill of a carnival huckster or snake oil salesman is a recipe for “success” in “evangelism” in the mind of most today. None of this has any foundation at all in the scriptures and is but the inventions of men. “These are wells without water, clouds that are carried with a tempest: to whom the mist of darkness is reserved forever. For when they speak great swelling words of vanity, they allure through the lusts of the flesh, through much wantonness, those that were clean escaped from them who live in error. While they promise them liberty, they themselves are the servants of corruption: for of whom a man is overcome, of the same is he brought in bondage. For if after they have escaped the pollutions of the world through the knowledge of the Lord and Savior Jesus Christ, they are again entangled therein, and overcome, the latter end is worse with them than the beginning. For it had been better for them not to have known the way of righteousness, than, after they have known it, to turn from the holy commandment delivered unto them. But it is happened unto them according to the true proverb, The dog is turned to his own vomit again; and the sow that was washed to her wallowing in the mire.” (2Pe 2:17-22) Against this backdrop those who would dare to question the madness of all of this are considered as those who have no compassion or concern for lost and dying sinners.

The truth is that true evangelism is the clear proclamation of the gospel of the redemption which has been secured by the blood of the LORD JESUS CHRIST. It is the declaration in no uncertain terms of HIS LORDSHIP and power over all flesh. It is the announcement of a message of hope for the vilest of sinners, the pronouncement of HIM who said “The Spirit of the Lord is upon me, because he hath anointed me to preach the gospel to the poor; he hath sent me to heal the brokenhearted, to preach deliverance to the captives, and recovering of sight to the blind, to set at liberty them that are bruised, To preach the acceptable year of the Lord.” (Luke 4:18-19) True evangelism begins and ends with declaring CHRIST JESUS and HIM crucified, risen from the dead, and reigning at the right hand of the FATHER from whence HE shall come in flaming fire taking vengeance on all them that know not GOD. 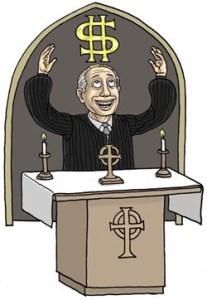 Those who speak great swelling words and tell us of their grand commitment to preach and win souls are either deceivers or deceived. We often hear them say that more souls can be won if more money is given, they say we have it within our power to rescue souls based on the amount of money and time spent in the endeavor. If they truly believe that the salvation of the souls of men are dependent on money, then why do they not spend every dime they have, going hungry with rags upon their backs to keep men out of hell? Do they not care? Why do the great “missionary” organizations which are constantly begging for more money to fund their endeavors, also establish pension plans and furnish lavish lifestyles for the executives and planners. Why do they not spend every waking moment trying to rescue the “lost”? Why do they have TV’s, while millions are going to hell that they could prevent, are they watching TV while men perish that they could rescue? Why do “evangelists” deem it necessary to travel in high dollar motor coaches, why are they not walking through the streets of every city getting decisions and saving souls? Does it not seem odd that they will not even preach in certain places because they are not being paid enough money to come.

True evangelism has nothing at all to do with money; either trying to persuade men to give some of it or of preachers desiring to have it. If the LORD sends a man with the gospel HE will also provide the means for the task without him panhandling for the funds. True evangelism is about desiring to exalt the name of CHRIST knowing that there are trembling sinners prepared by the SPIRIT in need of a word of hope and comfort. It is not an optional pursuit for those who have been sent to the task. (see I Cor.9:16,17) The purpose of true evangelism is to glorify CHRIST knowing that, “The people that walked in darkness have seen a great light: they that dwell in the land of the shadow of death, upon them hath the light shined.” (Isaiah 9:2) “Therefore said he unto them, The harvest truly is great, but the laborers are few: pray ye therefore the Lord of the harvest, that he would send forth laborers into his harvest.” (Luke 10:2)