DO YOU BELIEVE IN THE FREE OFFER OF THE GOSPEL?

The answer to this question is sure to raise the hackles of those who have never pondered the full meaning of what they are generally asking. The simple answer is that the scriptures do not speak of the gospel being “offered” as if it had been put on sale or set forth for the passersby to handle and taste and see if it is to their liking. For one to consider the gospel as an offer to be accepted or rejected is either to misunderstand the condition man is in by nature or to disregard the scriptural teaching of the operation of the SPIRIT of GOD in quickening dead sinners and drawing them irresistibly and inevitably to believe it. The gospel is not an offer, but it is a declaration of what JESUS CHRIST has done to save sinners. There is no “offer” involved in the preaching of it, it is in no way contingent upon anything but the shed blood and absolute righteousness of JESUS CHRIST the LORD of glory.

A thorough study of the scripture reveals that HE came in to the world for a particular purpose which was revealed to Joseph, in Matthew’s gospel, “And she shall bring forth a son, and thou shalt call his name JESUS: for he shall save his people from their sins.” (Mat 1:21) He was not told that JESUS would “offer” to save HIS people, try to save HIS people, or even hope to save HIS people. He was told that HE would actually accomplish their salvation. When Peter preached on the day of Pentecost, he did not offer the men of Israel a “chance” to be saved, rather, he declared to them in no uncertain terms that GOD had raised up the man whom they had crucified as the risen and triumphant LORD and CHRIST. No offer was ever made in any of the preaching of the apostles nor did any of them set forth a conditional salvation which they could at any time take advantage of or neglect as the case may be.

It is interesting to point out that the apostles never instructed men on “what to do” until such time as those who were “pricked in their hearts” cried out to them. (see Acts 2:37-38; 16:30) At such time they commanded them to believe and be baptized. This “pricking” was the work of the SPIRIT of GOD and was visited upon them without their consent or decision. “And when the Gentiles heard this, they were glad, and glorified the word of the Lord: and as many as were ordained to eternal life believed.” (Act 13:48) One moment they were ignorant of any salvation or even the need for it and the next they were rejoicing in that which the LORD JESUS had accomplished. This is a supernatural work of GOD and not something men can be persuaded to accept; nor might I add can they be prevented from believing it whenever the LORD has opened their heart as HE did Lydia or the Ethiopian eunuch. (see Acts 8:34-39; 16:14) 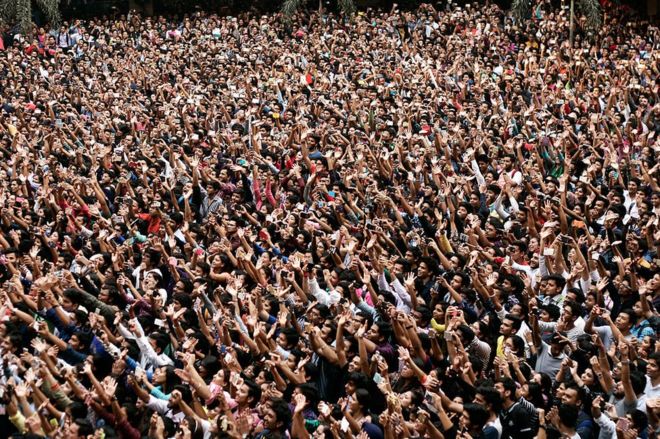 Someone has said, “if we knew who the elect were, we would just preach to them,” but I believe such an attitude is not to be discovered in the scriptures. The LORD JESUS instructed HIS disciples to “preach the gospel to every creature.” (see Mark 16:15) We don’t preach the gospel “to get men saved” nor is it any business of ours to try to determine who those are who do believe it. Rather our task is to exalt and publish the glory of GOD in the redemptive work which the LORD JESUS CHRIST has accomplished in the earth. Those who are sent with the message are to proclaim it to all who are within earshot, even if they never cross paths with any of the elect. “Now thanks be unto God, which always causeth us to triumph in Christ, and maketh manifest the savor of his knowledge by us in every place. For we are unto God a sweet savor of Christ, in them that are saved, and in them that perish: To the one we are the savor of death unto death; and to the other the savor of life unto life. And who is sufficient for these things? For we are not as many, which corrupt the word of God: but as of sincerity, but as of God, in the sight of God speak we in Christ.” (2Co 2:14-17) We are not concerned with our “success” in gaining converts nor even whether or not any will “listen” to us, but we are certain that the LORD has a purpose in the proclamation of the gospel wherever it is sent. “So shall my word be that goeth forth out of my mouth: it shall not return unto me void, but it shall accomplish that which I please, and it shall prosper in the thing whereto I sent it. “ (Isa 55:11) Whatever HE is pleased to send it for, HE will accomplish, and that in HIS own time.

We do not have to manufacture a “fervor” to be “effectual”. Only GOD can make our efforts “effectual” and HE is quite able to stir up HIS preachers with the passion necessary to declare HIS message. If HE does not attend to the efforts of those who claim to be preachers of the gospel then their attempts will be cold and lifeless and full of much of the letter of truth but devoid of the SPIRIT even though they be learned and eloquent. Paul was such a preacher upon whom the SPIRIT of GOD was pleased to dwell. He said, “And I, brethren, when I came to you, came not with excellency of speech or of wisdom, declaring unto you the testimony of God. For I determined not to know any thing among you, save Jesus Christ, and him crucified. And I was with you in weakness, and in fear, and in much trembling. And my speech and my preaching was not with enticing words of man's wisdom, but in demonstration of the Spirit and of power: That your faith should not stand in the wisdom of men, but in the power of God.” (1Cor. 2:1-5)

It was this same Paul who declared, “Now then we are ambassadors for Christ, as though God did beseech you by us; we pray you in Christ's stead, be ye reconciled to God. For he hath made him to be sin for us, who knew no sin; that we might be made the righteousness of God in him.” (2Cor. 5:20-21) The preaching of the gospel is a message of “reconciliation”. It is the declaration that GOD hath reconciled us to HIMSELF by the blood of JESUS CHRIST which is good news indeed to a sinner bowed down with his sin and despair. But it is also sent as a message of encouragement unto those who are given faith to believe it to “be reconciled to GOD”; that is, to rest in the hope that HE has given. The gospel is a continual word of reconciliation whereby the believing sons of GOD are reminded that HE has indeed forgiven them and they can find comfort in this hope which HE has given them.

All of this is the operation of grace wrought in HIS own children by the work of HIS SPIRIT and involves no “offers”, “invitations” or “trial basis”. Does this mean then that we are unconcerned for the lost estate of men in general or that we do not care for them? No, but we are not so presumptuous as to think that we have a remedy which GOD HIMSELF has not been pleased to apply. We are indeed moved for our fellow men even as the apostle Paul was for the nation of his birth when he said, “I say the truth in Christ, I lie not, my conscience also bearing me witness in the Holy Ghost, That I have great heaviness and continual sorrow in my heart. For I could wish that myself were accursed from Christ for my brethren, my kinsmen according to the flesh:” (Rom 9:1-3) We cannot help but weep for our children and grandchildren, but we know of no other to whom we can apply for mercy than to HIM who alone is able to melt the heart of stone and grant repentance, to open the eyes of the blind and give the dead new life in CHRIST JESUS. Some seem to imagine that their mercy is wider than GOD’s, but I think they are deceived. We are made in all situations to fall upon our faces and confess as Peter did, “Then Simon Peter answered him, Lord, to whom shall we go? thou hast the words of eternal life.” (John 6:68)

In evil long I took delight,
Unawed by shame or fear,
Till a new object struck my sight,
And stopped my wild career.

I saw One hanging on a tree,
In agonies and blood,
Who fixed his languid eyes on me,
As near his cross I stood.

Sure never till my latest breath
Can I forget that look;
It seemed to charge me with his death,
Though not a word he spoke.

My conscience felt and owned the guilt,
And plunged me in despair;
I saw my sins his blood had spilt,
And helped to nail him there.

A second look he gave, which said,
“I freely all forgive;
This blood is for thy ransom paid;
I die that thou may’st live.”